The Trust – A Review 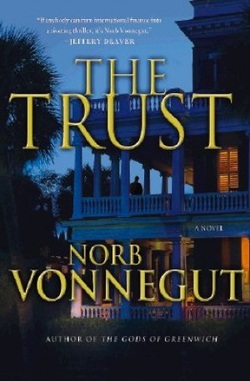 So in 2011 I published my first novel, a thriller set primarily in Charleston, South Carolina.  It’s called The Trust.

In addition to writing novels, from time to time I review them.  I don’t have any set formula as to what books I review – if one interests me, I’ll review it.

In July of this year I learned a thriller entitled The Trust, set primarily in Charleston, South Carolina, was to be published.

I was quite intrigued.  So I ordered a copy and after reading it I decided to review it because outside of reviewing my own book (awkward), when else would the opportunity to review a book titled The Trust come about?

The Trust is the third novel from Norb Vonnegut.  (If you’re asking the question, “I wonder if he’s related to Kurt Vonnegut?” the answer’s yes.)

When I learned that Vonnegut’s book was a financial thriller my concern was that the plot may take us through the recent Wall Street woes; however, Vonnegut has steered clear of this and lifts us from New York to the rather more relaxed climes of Charleston, South Carolina – the book’s primary setting.

In Charleston a (very) wealthy local resident, Palmer Kincaid, has died.  Mr. Kincaid lived a long and full life.  Among his many accomplishments was the establishment of The Palmetto Foundation, a philanthropic trust that promotes and fosters charitable causes around the world.  Upon his death the management of the foundation was vested in a board of directors consisting of his daughter and his widow.  Kincaid’s also extends board membership, via his Last Will and Testament, our main character, Grove O’Rourke, Kincaid’s long time friend and confident.

Being on the board of a charitable foundation.  In charming Charleston, South Carolina.  How difficult could this possibly be?

At Vonnegut’s direction, more than a little and this makes for an interesting tale.

Being a long time (and current) resident of Charleston, I fancy myself as being slightly familiar with Charleston and one of the characteristics of the city can be summed up in the saying, “Still waters run deep.”  The surface of the city frequently presents a genteel facade that belies what can sometimes be a sordid and dark undercurrent.  In The Trust, Vonnegut homes in on this aspect of the city.

Following Kincaid’s death O’Rourke finds himself in Charleston and almost as quickly as the trip from New York, matters for O’Rourke become complicated – adult toy stores, mysterious Catholic priests, secret charities, offshore bank accounts, lawyers, FBI agents and a host of other problems create a web that becomes more and more intertwined with the turn of each page.

Vonnegut’s style is to bounce the action between settings and acclimating to this can take a bit of effort.  He also alternates between narration in first person (when O’Rourke is in the scene) to third person (for all other characters).  This too takes a bit of effort to catch the story’s rhythm.

Vonnegut creates memorable characters in The Trust.  Grove O’Rourke is a wonderful everyman.  Perhaps his most endearing quality is that he is an average guy.  While that may not sound the resounding endorsement of O’Rourke as a character, it is as he is simply believable in what he says and does.  This allows the reader to form an attachment to him and vests you in his feelings, beliefs, thoughts and actions.  You’ll end up rooting for him as he takes you through the tale.

The plot is engaging.  The story rarely slows and welcomes the reader in.  Vonnegut gives us several unexpected twists and turns though they do develop rather abruptly.  Vonnegut also provides the reader closure thereby avoiding the likelihood of having the reader left wanting for closure.

I read a lot but have never read a financial thriller and had Vonnegut’s book not shared the same title as mine, the odds are low that I would’ve ever opened The Trust.   However after reading it, I’m intrigued about his first two books.

Fans of thrillers, mystery, suspense and southern fiction would enjoy The Trust (Vonnegut’s as well as mine).