The Rook by Steven James – A Review 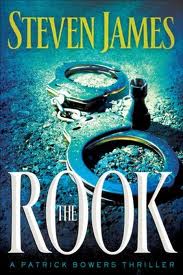 It didn’t take me as long to get around to The Rook by Steven James.  I let James’ first book, The Pawn, gather a little too much dust before I realized what I had been missing. (My review here).

Truth be told, I’ve been steaming through the books in The Bowers Files, so named for the main character, Patrick Bowers.  With a little concern I will discuss below, I’ve enjoyed them all quite a great deal, enough to move James up to one of my preferred authors in his genre.

So all aside, The Rook is a very solid follow up to The Pawn.

In book two, Patrick Bowers, an FBI environmental profiler, is called to San Diego to assist in the investigation of a serial arsonist.

But of course it could not be as simple as just an arson investigation.  As the fires continue to occur it’s obvious they are just a small part of something much larger that reaches into the military and the government as a whole.  Bowers has to rely on all of his deductive reasoning and profiling ability to get to the bottom of things.  You’ll even find some familiar faces in among the villains.

James does a wonderful job of building on The Pawn not only in the further development of his main characters, but also in introducing some new characters that only add to the enjoyment.

While it’s quite enjoyable to see how Bowers processes a mystery, never being quite willing to accept the norm and frequently pushing the envelope, one of the most interesting parts of the book is the development in his relationship with his stepdaughter.

Following The Pawn I was a bit concerned there may be tenuous or perhaps even clichéd aspects of the angst ridden teenager/step-parent relationship in books to com.  Not to worry, James does a great job of blending this aspect of the plot into the book as a whole so the relationship not only compliments but also becomes an important part of the entire story.

In The Rook James has crafte

As I said above, since I finished The Pawn I’ve been working through James’ Bowers Files and there have been very few things that have not been pristine.

If you enjoy character driven mystery and suspense with crisp dialogue and a keen sense of criminal procedure, so long as you can invest a little into the suspension of disbelief, you will likely love this series.

I’d love to hear your thoughts so feel free to comment below.