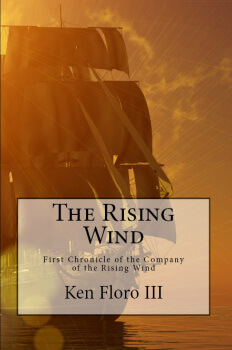 So the saga begins.

Author Ken Floro III, from the heart of middle America, takes us on a trip to another world.

From the pages of The Rising Wind springs forth this new land, complete with damsels, myth, legend, knights, magic, mystery, intrigue, adventure, yes, all of this. And one Goblin.  Neat chap, this Goblin.

The pair is making their trip on the ship known as The Rising Wind and, once the pair boards, their adventure quickly gets underway.

On the ship, the cast of characters is rounded out.  The pair are joined by an archer of legend, a mystic priest, a mysterious navigator, a petty criminal, a comely damsel, the captain, crew and, oh yes, the goblin (sent by Marc’s father to accompany him on his journey.)

It should be but a quick sail for the knights.  (Not much more than a three hour cruise.) One would think all they would have to do is relax and enjoy some rest and relaxation before they began their service.

But what fun would that be?

From the moment the knights set foot on the boat things start to get complicated.  It seems there has been a theft and the authorities believe the culprit may be on The Rising Wind.  The knights quickly address this situation.

With this the stage is set and what should have been a short trip ends up being an experience that none will soon forget.

Floro does a great job of developing an interesting cast of characters.  He has a lot going on among and between the characters that would, in many cases, grind the story to a halt, but he avoids this, quite the contrary, he uses it to really set up the story.

Floro’s character development is also quite impressive.  Rather than dumping everyone in your lab at once, he allows the reader to come to know the characters as they enter the story.  Perhaps this is a result of the setting.  Much of the book takes place in the isolation of The Rising Wind.  Floro allows the reader the opportunity, as the pages turn, to meander the ship and essentially learn about the characters as they are discovered.

Another enjoyable part of the book is the completeness of the tale while at the same time engaging in a wonderful set up to the sequel.  I’ll look forward to seeing what happens to the characters I’ve met in this book.

Readers who enjoy fantasy and tales that allow the reader to enter a brand new world will enjoy The Rising Wind.