The Pawn by Steven James – A Review 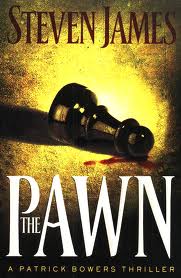 I’ve always fancied myself as having good radar for the fiction available today.  Particularly in the genres I enjoy, but it seems I need to take the radar unit in for a check up.

A while back a copy of The Pawn by Steven James landed on my desk and, for whatever reason, it just sat there.  I think I may have even dusted it off at one point.  So after the New Year I decided to see what I’d been neglecting.

Turns out I’d been neglecting a lot.

The Pawn is a great book. It’s a crisp, tight novel that not only does a wonderful job telling a great story, but it also serves as our introduction to Patrick Bowers.

Bowers, actually Dr. Patrick Bowers, is a profiler for the FBI, but not the traditional “get in their head” profiler.  Bowers is an environmental profiler.  He looks at patterns, environmental factors, locations, settings and the like to determine where as opposed to whom.  For him the motive for the crime isn’t really the driving cause, but more so where and how crimes have occurred.  He goes where the worst of the worst commit their crimes.

Trouble is, not everyone, actually few, see his genius.

Aside from using a new and fringe approach to profiling, Bowers is also a flawed hero.  His wife, the love of his life, recently succumbed to cancer.  After her death Bowers found himself the caregiver of his deceased wife’s teenage daughter.  It seems that FBI profilers and teenagers have somewhat of a disconnect when it comes to interpersonal relationships.  The story between Bowers and his step-daughter, Tessa, is worth the price of admission alone.

All of this serves to make Bowers a very interesting and engaging protagonist.

With that as the backdrop, on to the story.

Bowers has traveled to Asheville, North Carolina to assist with a string of deaths attributed to a serial killer.

As I was reading along, moving through a very well crafted plot and well-paced plot, I found myself approaching what seemed to be a conclusion.  Confusing to me as more than half of the book remained, but I discovered this was intentional.

James starts the book out as a straightforward mystery with a good guy chasing a bad guy, but as the plot evolves and develops James expands his reach and incorporates additional elements creating page-turning suspense as the book moves along, important resolutions lead to more conflict and more suspense.

James’ dialogue is crisp, the characters are engaging and his sense of setting is spot on.

James’ style of writing also makes for a quick read.  In the end The Pawn blends historical events into a current day mystery that will keep you on your toes until the end.

If you’re looking for a book for vacation or for a trip, this is definitely a book worth considering.  Fair warning though, if you are a fan of police procedurals, mysteries or the thriller/suspense genres, you’ll likely find yourself collecting the entire series of Patrick Bowers books.  I’ve started his follow up, The Rook and will report back when I’ve finished.


Feel free to leave your own comments below.
Share This