The First Days by Rhiannon Frater 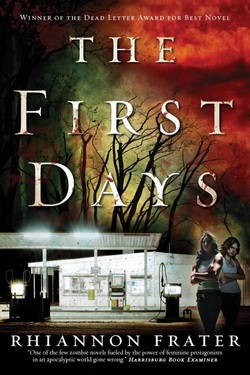 I’m late to the party.

After seeing The Last Bastion of Humanity (my review here) on a recommend read list, I  decided to give it a try.  It didn’t take me long to finish my first book by Rhiannon Frater.  It was my hope The Last Bastion wasn’t a one trick pony, so I started with one of Frater’s earlier works, The First Days, book one in the As the World Dies series.

Frater’s the real deal when it comes to zombies.

As the title should lead you to believe, The First Days details the start of the zombie apocalypse.  The main characters are two strong, yet troubled women who are thrown together through circumstances that no one could imagine.  Despite having no idea want is happening or what to do, the women find themselves with a group of survivors in rural Texas.  The First Days sets the stage for the follow up novels where I am hopeful (I’ve yet to read them, but soon will) Frater will expand upon the foundation she has built.

When I read works by writers with a catalog the size of Frater’s, I jump on the site of one of the online corporate booksellers and read some reviews to get an idea of what people are saying.  However, I don’t bother with the 4 and 5 star reviews.  I head straight for the 1 star reviews.  I find that if there are problems with the book the 1 star reviewers will make them loud and clear.

From most of the reviews of The First Days, one of main points is that Frater doesn’t tell the reader what caused the zombie plague.  I’m here to report that this is accurate, she doesn’t tell us a thing about what caused the plague.  I’m also inclined to say, “So what?”  I understand people want to know everything, but just because you want something doesn’t mean you will get it or should.

Frater does credit to the story by not telling what caused the plague.  One thing Frater does amazingly well is describe the speed with which the zombie plague spreads and the denial many people experience when confronted with their new reality.  She also makes if very clear that the survivors are scrambling to salvage what they can of humanity, largely making it up as they go along.   What caused it really doesn’t matter, only the reality of the problem.

I’ve never been through a zombie apocalypse, but I have to think that survival would be on the top of my priority list.  I’d be curious what caused it, but I would probably be more concerned about how I would survive.

One thing Frater does amazingly well is leave the reader with vivid images.  Admittedly, I’ve never seen or witnessed a real zombie, but the images Frater has left with me makes me wonder if she may not have seen a zombie or two stashed in her basement.   They are simply chilling.  As a teaser (and as a bit of a fair warning) the opening scene is one of the most frighteningly vivid I have ever read, so enjoy.

Frater has as style of writing that does several things.  She effortlessly breaths life into characters, her story comes to life on the page and put the reader right in the middle of the action and she makes you want to keep reading.

If you’re a fan of zombie fiction and you haven’t read Frater as of yet, change that soon.  You will be glad you did.