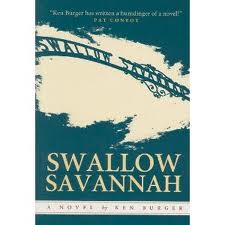 In the late 1940’s there wasn’t too much to Groton, South Carolina but that all changed with two things.  First, the arrival of Frank Finklea and second, the beginning of construction on the Savannah River Plant.

So, let me introduce you to the world you’ll find in the pages.

Frank Finklea rolled in to Groton, South Carolina with little more than the shirt on his back, but he had a gift for self-preservation and survival.  He quickly put them to work and in short order found himself in the mix of the Groton elite, but that wasn’t enough.  He set his sights higher and ended up in the South Carolina legislature where he maneuvered in such a fashion to become one of the richest, most powerful politicians in the entire state.  It didn’t hurt his rise that he was corrupt and when you have a corrupt southern politician and a nuclear power plant in the same equation, rarely can anything good result from the mix.

That is the setting for Swallow Savannah, the first novel from veteran newspaperman, Ken Burger.  Burger spent many a year on the staff of the Charleston Post & Courier covering news around the state.  A career of experience and observation shines through in his writing.

He has a gift for the dialogue and personality of the South Carolina residents, particularly those of the Lowcountry.  He captures the setting so perfectly you can smell the marsh, hear the ocean or see the road winding away through the front windshield.  He transports you onto the pages where you feel as if you are watching a drama unfold before you.

But that is only Burger’s style.  We haven’t even come to the story yet.

One thing that the South is famous for is that which runs beneath.  It seems anyone you encounter in the South has a dark side, some skeleton (or even graveyard) in their closet that they deal with by repressing or hiding from the rest of us.  It is not unusual for everyone else to know about these demons, but the demons simply aren’t fodder for polite conversation.  Burger hits a homerun in capturing this facet of Southern life.  There are a lot of demons in Swallow Savannah and they all make to solidify an already compelling tale.

When I first picked up the book I was impressed to see that the famed southern writer Pat Conroy had heartedly endorsed the book.  After reading it, I had to agree.  If you like dramatic fiction that takes you behind the shiny happy faces you pass on the street, you will enjoy Swallow Savannah.  Family drama, deception, political intrigue, mystery and suspense, you’ll find all of that and more.

Burger won a first place prize in regional fiction with Swallow Savannah in the prestigious Independent Publisher’s competition in and after reading this book it’s easy to see why.  The best thing is that although this is his debut, the follow up, Sister Santee is ready and waiting.  I for one can’t wait to get my eyes on it.