Speculation by Edmund Jorgensen – A Review 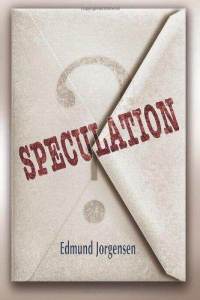 Jorgensen’ characters are well rounded, interesting and believable. His writing is well paced.  He’s taken philosophy and made it an interesting read.  And he makes you want to turn the page.

But what makes Speculation perhaps most unique is that at its root the plot boils down to a simple choice.  Door number 1 or Door number 2.  To make things even more interesting we know, to the penny, the exact amount (and it’s a huge amount) behind Door number 1.  Door number 2 on the other hand is a lone envelope.  And herein lies the rub – no one knows what is in the envelope.  (Being no stranger to unknown contents in novels, Jorgensen had me early on.)

Condensed further the plot is simply this – A or B.

Expanded slightly, philosophy instructor Andrew Wrangles, receives a phone call from the Law Offices of X, Y and Z (literally).  After a quick bit of checking Wrangles learns that he’s been named in the will of his good friend, Stanley Riordan.  Wrangles and Riordan, friends since college shared an appreciation of philosophy – the what if’s in life.  Now that Riordan is dead Wrangles is left with a final decision between 10 million dollars or an envelope.

But would Riordan make it that simply?  Of course not.  If he did it wouldn’t be a mystery.  So to make things interesting Riordan also left behind a few clues.

From this philosophical crossroads Wrangles sets out to answer one simple question.

One clue leads to another clue and then another.  Along the way Wrangles learns about his friend, their lives together, their other acquaintances, and, perhaps most importantly, about himself.

Jorgensen does a wonderful job keeping the reader engaged while Wrangles continues his search.  In doing so Jorgensen uses a number of literary devices that are surprisingly refreshing and serve well in moving the plot along.

When you have a book, the main character of which is a philosophy instructor, there will likely be (and in Speculation there is) a good deal of philosophical discussion.  For most of us who have not studied philosophy this may raise the eyebrow of hesitance.  I’ve tried to read philosophy and have a difficult time with it.  Not all of us are equipped for higher abstract thought.  However, Jorgensen does a masterful job of blending existential concepts into the plot and doing so in a fashion where the reader doesn’t stop after a couple of sentences wondering what they’ve just read rather they find themselves asking the same questions.

Thanks to the questions Jorgensen poses, Speculation keeps you guessing.  The twists and turns will keep your nose to the page.  However perhaps the most interesting part of the book is the constant reminder that the true question is simply A or B.

However simple as it may be, Jorgensen takes a this choice and helps us understand how it really isn’t all that simple.

10 million dollars or an envelope?

At first blush it may seem straight forward but take a moment to think about it.  If it’s a balance between 10 million dollars and an envelope, shouldn’t the envelope be worth at least that?  Or perhaps more?  Or less?  Is it worth 10 million dollars to know the contents as opposed to having the money and not knowing?  Is it even difficult at all?  After all, it is 10 million dollars…..

The questions are endless.  In fact, I still find myself wondering what I would do if faced with the same question.

Perhaps the thing I enjoyed most about the book was how it engaged me.  Speculation gives a scenario – A or B – and invites you to make the decision.  Jorgensen provides a few gentle nudges to kick start the process, but I asked, and, candidly, am still asking and answering the question as to what I would do if given the same choice.

Fans of mysteries and literary fiction will enjoy Speculation and I’m already wondering (speculating perhaps?) as to what Jorgensen will bring use next.  I’ll be waiting.

Novel Publicity Blog Tour Notes: Wanna win a $50 gift card or an autographed copy of Speculation? Well, there are two ways to enter…

About the author: Edmund Jorgensen was born in Chicago. He studied classical languages and has maintained a love for all things Greek and Roman. He fell in love with his wife in Mexico; they now reside, happily but considerably more chilly, in Watertown, Massachusetts. Edmund is currently hard at work on his second book, a set of interconnected short stories. Connect with Edmund on his website, Facebook, Twitter or GoodReads.

Get Speculation on Amazon or Barnes & Noble.

EMBED CODE can be found at http://www.rafflecopter.com/rafl/share-code/YzE3YzI0YTkzYTJkODQ0ODQxZDUwNTUwMTQ3OTkxOjE2/