So Cometh the Egg (and with it Much Fun) 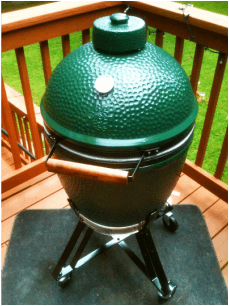 I’ve always had a grill.  Something about cooking outside, I guess.  Perhaps it’s the fact that no one really questions the cook having a beverage in hand while cooking.  Maybe it’s cooking over an open flame.  Maybe it’s an escape.  Perhaps it’s a return to the primal drive of man. ( I’m not too sure about the last one, but grilling certainly is fun.)

I’ve had a grill as long as I can remember.  At different times I’ve also had electric smokers and other contraptions as well.  With many of the traditional gas grills I’ve been quite frustrated that, even with regular cleaning, after a seemingly short time the grill’s interior essentially disintegrates meaning replacing the grill or curse your way through repairing.  I generally opted for a new grill, after all, I like getting a new grill.

Whenever I looked for grills, I always secretly wished for a Big Green Egg, but only recently did an Egg become reality on the deck.

For those of you who are not familiar, the Big Green Egg (BGE hereafter) is a ceramic, lump charcoal miracle of modern science.  With a system of dampers the air-flow is controlled thus allowing temperatures to be set to within several degrees.  It is this feature that allows the BGE to be used for low and slow all the way up to high heat, direct grilling (in excess of 700 degrees).  It can be used as a smoker, it’s self-cleaning and takes up little space.  In short, it’s amazing.

So I bought one.

I’ll never go back to any other type of grill.  The BGE is simple to use, won’t fall apart, is easy to start and is the most versatile grill you’ll find.  With but a few accessories you’ll be cooking pulled pork that will make you look like a pit master, grilling steaks like you’ve never had, amazing people with grilled turkey, dropping jaws with wood fired pizza and raising eyebrows when you talk about the mac n’ cheese and corn bread you cooked on the grill.  (Yes, pretty much anything you want to cook, you can cook on the BGE.)  In fact if you’re sitting here thinking, “I bet you can’t cook _______ on that green grill.”  Well, you would be wrong.  If you can cook it, you can cook it better on the BGE.

Another thing that is nice about the BGE is that BGE owners not only love them, but they love to talk about them and what they cook.  There are forums galore to help everyone from the novice to the seasoned expert.

If you’re in the market for a grill, check out the BGE.  It cost a bit more, but it’s worth every cent.  Also check back from time to time, as I’ll be posting my recipes from the BGE.  Feel free to email with any questions.