Serena by Ron Rash – A Review 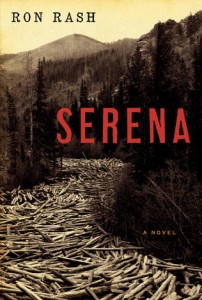 I’ve been a fan of Ron Rash for a number of years.  Could be because I grew up in the South, maybe it’s his stories, perhaps his characters, most likely it’s simply because Ron Rash is an amazing writer.

I’m pretty sure it the latter.

Rash, a college professor at Western Carolina University, writes a great deal about Southern Appalachia.  You won’t find zombies or vampires, nuclear bombs or plots where the fate of the universe hangs in the balance.  What you will find is crisp, quality writing. And the most captivating stories.  Rash is such a polished and focused storyteller that his work all but comes to life on the page.

In Serena, the backdrop is 1929 Asheville, North Carolina.  George Pemberton, a timber baron, has brought his new bride, Serena, to live with him as he supervises his company’s clear cutting in the North Carolina mountains.

George has been living in Asheville for sometime, even fathering a child with a local woman (much to the chagrin of her relatives).  Then after a trip home to Boston he returns to the wilds of Asheville with a beautiful young wife.

Initially you wonder how a beauty from Boston will fare in the backwoods of North Carolina, but she proves more than capable of getting along.

George and Serena start their life together, but circumstances take an unexpected turn when Serena learns she cannot have children.  After discovering this she focuses her rather polished and dangerous ire on Pemberton’s son from prior to their marriage.

In Serena (the character) Rash has created one of the most memorable characters I’ve seen in sometime.  I won’t spoil the experience of learning about her, rather I’ll leave that to you to discover.

To bolster this primary story, Depression era North Carolina against where the tale is set comes off of the page more like a painting rather than the written word.  It’s clear that Rash has not only a gift for the written word, but that he is a master of all that is Appalachia, embracing not only the history but customs, patterns and styles of those who have called this area of our country home for centuries.

As the story progresses Rash weaves a plot that flows seamlessly as each page builds upon itself to the next.  The conflict within and between the characters is so subtly developed that while it may not seem at first as if the characters are changing, suddenly you will see a transformation that will astound you.  And as much as the characters transform, I believe at the root of the tale, they are simply learning their true identity and acting as their fate has determined.

The ending of Serena is astounding.

I learned not to long ago that Serena is being made into a motion picture staring Bradley Cooper and Jennifer Lawrence.  Given this book as a vehicle, it’s my hope that the film will accurately capture the essence of the tale and, if it does, it will be a movie that you will not want to miss.  I also hope it expands Rash’s literary reach.  But don’t wait for the movie, get the book.  You’ll be glad you did.


I’d love to hear your comments, so feel free to leave them below.
Share This