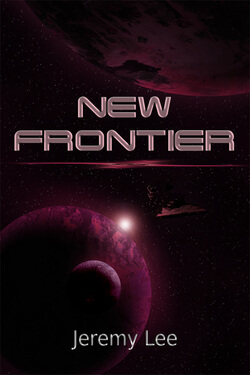 The one thing that is the most enjoyable about the genre of science fiction is entering the realm of possibility – the land of that which could happen.  Many people read the genre as an escape, others for the action, some, well, just because.  And that’s ok.

However, for many the reason they flock to the style is to take a figurative, if not literal, glimpse into the future.  Think Brave New World, Stranger in a Strange Land, 1984 or, if you haven’t read it, check out Stand on Zanzibar for a few frighteningly accurate visions of the future.

New Frontier here fits the bill by offering a picture of a possible future for humanity.

The time frame of the book isn’t given.  I don’t know if it is necessary.  Rather what is important is that it is the potential for what could happen.

If you’ve ever read a book and wished for more characters, New Frontier, is the book you’ve been looking for.  There are a lot, and I mean a lot of characters.  With a lot of characters, you also get a lot going on in the book.  Part of the enjoyment of reading it is to unravel the tale.  All of this is set against a delightful literary background.  Fair warning, read it over a weekend or during a couple of days where you can forge through it as this will help with focus and reader continuity in staying with the story.

The book starts with an accident on a deep space ship called the Argos on a mission to the far reaches of the universe.  The ship has the ability to do things that no other spacecraft in history has ever even dreamed of accomplishing.  It is faster, technologically more capable, has a longer range and is, in many ways, the key to the future.  However, with the accident, the ship is crippled and the aftermath becomes critical to our tale.

As in any good tale from the science fiction genre, you’ll find futuristic technology, but as interesting as the technology is, the glimpse into the future offered by New Frontier for the entirety of mankind is what makes the book intriguing.

New Frontier offers a look at a reality that is well beyond the limits of the earth as we know it.  Mankind is no longer bound to the confines of our planet, rather the reaches of the solar system are within the grasp of humanity and as a result, this vast area has become much like the wild west.  There are colonies, outposts, homesteaders, opportunists and with this comes the struggle and fight to control the new frontier.  Like the wild west, you have the good, the bad and the ugly.  New Frontier is a study in the good verses the evil and these themes are embodied through the characters as they are revealed and developed, but these themes really step to the forefront through what I was most intrigued with in the book.

Lee creates a world where governments are all for the most part figureheads.  There for no other reason as people expect government.  However, the world has developed to the point where the power rests with but a few rival corporations battling for universal domination.

There are several aspects of the book that I found took away from the whole.  As I said above, there are an abundance of characters that can a struggle to follow.  I didn’t find there to be one main character which out of the norm for me.  I believe that fewer characters would have resulted in less for the reader to track and overall stronger characters.

Lee also uses a different approach as to the timeline of the book.  The book opens with chapter entitled “Now” and there after jumps around into the past or future with no clear pattern.  The jump may be months, it may be years, it may be to the past or the future. When you leave a character, you may next encounter a past or future version of them which makes for a disjointed approach to the timeline. In the balance against the story as a whole and the fashion in which it is presented, the story clearly wins given the strength of the story. I only wonder if it would not have been even stronger had it been told in a different fashion in relation to the timeline.

Overall, New Frontier is a solid book.  It is an entertaining read that makes the reader think even after putting the book down.  As I have always said, if you can keep the reader thinking even when they are done with the book, you as a writer have created something worthy of the reader’s effort.

About the prizes: Who doesn’t love prizes? You could win one of two $50 Amazon gift cards or an autographed copy of New Frontier! Here’s what you need to do…

That’s it! One random commenter during this tour will win the first gift card. Visit more blogs for more chances to win–the full list of participating bloggers can be found HERE. The other two prizes will be given out via Rafflecopter. You can find the contest entry form linked below or on the official New Frontier tour page via Novel Publicity. Good luck! About the book: As a new era dons for humanity with all the attendant celebrations and riots, finally breaking the bonds which left us tied to the Solar System is reported as being the moment which unites all the disparate parts of the world and brings us into an era of peace and discovery, and yet this giant leap is almost instantly marred by greed erupting into violence. The Argos, the ship sent out on this historic mission, is left adrift and crippled far from home, survivors of this mysterious attack struggle to hold their ship together and come to the rescue of homesteaders and compatriots relying on them to not only survive but retaliate, and rescue a world where the Solar System has become a rugged frontier ripe for colonization and opportunity filled with the honest and ruthless carving out lives past the veil of civilization. Several rival corporations, monopolies delving into every industry imaginable, have all but supplanted nation-states, keeping governments around only as a necessary fiction to pacify populations, and the realm of business now reaches into politics, military, religion, and all other aspects of human life. The frontier regions of space are a place filled with new homesteaders, miners, merchants, bandits, and scientific minds that is barely able to keep from slipping into total anarchy, a frontier region where people can disappear from their lives and head off into the unknown. New Frontier is an adventure which stretches from the furthest reaches of space, to slums in backwater cities, to the lunar capitol, and ultimately onto the wreckage of the great ship. The gallant and the selfish alike are forced to face the best and worst of human civilization far from home and decide what they truly believe in. Get New Frontier through Amazon or Barnes & Noble. About the author: Born in Odessa, Texas Jeremy grew up mostly in southern New Mexico. Strongly influenced by his grandmother’s adoration of history, and his mother’s love of reading, both of which he adopted early in life. Inheriting a work ethic from his father which served him well in the manic world of theater, Jeremy Lee started out writing for the stage, first in Denver and then in small New York venues while attending the New York School for Film and Television. With 2011’s Where I’m Bound I Can’t Tell he began working in novels with a deeply personal look at growing up without growing old, which simultaneously expanded into a worldwide adventure through the 20th century. Kings of New York began a long and rewarding relationship with Neverland Publishing, which continues even today. This gangster tale played in the wonderland of 20’s New York, and painted a picture of cons just trying to survive and make a dishonest living the ruthless world they inhabit. With New Frontier his career took an abrupt turn, looking not into the past but into the possibilities of the future. Exploring themes of strife, political corruption, greed, adventure, and religion, the book touched off a storm from reviewers. Jeremy Lee currently lives in Denver with his family, writing ferociously when he can’t find and excuse to be in the middle of nowhere fishing, getting blissfully lost in a museum, or occasionally just watching old Bogart movies and eating pizza on the couch. Connect with Jeremy on his website, Facebook,or GoodReads.. EMBED CODE can be found at http://www.rafflecopter.com/rafl/share-code/YzE3YzI0YTkzYTJkODQ0ODQxZDUwNTUwMTQ3OTkxOjEwMA==/