Lessons I Have Learned from Bacardi 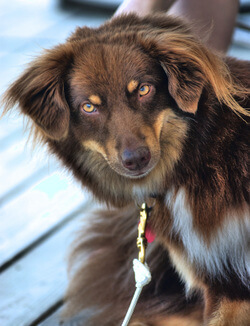 Or so said Johnny Depp in one of his pirate movies.  I’m certain, for his character in any event, the rum was his muse or at a minimum his motivation.

However, the Bacardi I‘m talking about is not actually a distilled spirit, but you could call this Bacardi a muse.  Of sorts.

Bacardi is one of my Australian Shepherds.  He’s also very supportive of my writing; however, I feel his support has more to do with the fact that on the days I write I’m home at his beckon call.  But regardless of the reasons, I’ve learned a number of lessons from Bacardi that have proven most beneficial to my writing.

Bacardi’s self-appointed job is to let the neighborhood know when a cat is in his yard.  Frequently the cat alarm is sounded in the wee hours of the morning.  However, when he sounds the alarm he sounds it with 150% conviction.

I’m rarely thrilled when Bacardi starts barking at 3:48 am, but I’ve learned that if you have a job the time of day shouldn’t matter. Bacardi barks at cats, he never misses the chance to do it and he always gives it his all.  I write, I can always go back to sleep or back to work, but if I don’t stop to write, and, like Bacardi, give it my all, I feel I’ll be the lesser writer as a result.

When he’s not barking at cats, Bacardi’s favorite activity is to run around his big back yard.  His favorite time to do this is first thing every morning.  After his run he can get to the more important tasks of the day (more on this in a moment.)

It occurred to me that this is what I needed to do with writing (after making sure Bacardi has had his turn in the yard, of course.)  I get up and I write.  Writing is what I love and Bacardi taught me to make it the first thing I do everyday.  The rest of the day will be waiting for you.

After the cats are cleared and the yard has been patrolled (and after a bite to eat of course), Bacardi takes a break.  Normally, as is the case as I write this, this break consists of a nap, but Bacardi’s philosophy is spot on.  There’s simply no need to run yourself ragged 24/7.  Work hard barking at cats or running around the yard, or writing, but take a break every so often.  It will give you more focus to bark at cats, or even to write.

When I walk into the house after any period of time away Bacardi is so excited you would think it was the first time he’d ever seen me.  One day I realized that just because something is familiar doesn’t mean you can’t get excited about it.  When I’m editing my writing, it may be the x to the nth degree time I’ve looked at it, but I always try to follow Bacardi’s lesson and get excited about it and throw myself into it with exuberance.

Finally, Bacardi has a couple of places around the house he likes. It may be a window to look for cats or it may be under the table in the dining room for a nap.  He can also be a bit mischievous so if he gets too quite for too long I take a moment and go look for him to make sure trouble is not afoot.  Usually I can find him in one of his normal haunts; however, sometimes I have to go look for him. On these occasions, I usually find him in a new spot with a dog bone or just napping.  Point is, be like Bacardi.  Don’t be afraid to stray from the normal or to break the routine.  I try to do this with my writing and feel this has been on of the most important lessons Bacardi has taught me.

Well, that and that I probably spend too much time watching my dog, but I’m pretty sure that I will be okay as long as he doesn’t start talking to me.

So while you’re here please feel free to read an excerpt from my book or even buy a copy of your own.

Oh, and by the way, that’s Bacardi smiling at you at the start of this post.