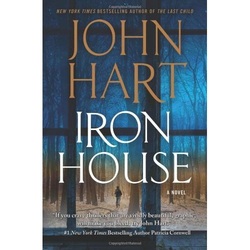 NOW ITS A GIVEAWAY
After I posted my recent review of Iron House, I was contacted by John Hart’s publisher who offered a FREE audiobook of IRON HOUSE to one of my blog readers.  Wanting to make sure not to let this opportunity pass, I jumped at the opportunity.

So I’m running my review again and inviting comments.  From the comments, after a 10 day run, I’ll randomly select one person to receive this amazing book on audio.  If you want another entry to win the book, tweet about this giveaway and mention @thetrustnovel in the tweet and make sure to link to this blog (here’s the link http://bit.ly/ndW5Ch) .  Good Luck to Everyone!

I discovered John Hart a few years back.  I read his first book and loved it.  I was even more pleased when I learned he had a second book out and I was able to dive right in.  Then, as an added bonus, I learned his third, The Last Child, was soon to be released.

Then I had to wait for number 4.

It was worth the wait.

Through each of his 4 books, Hart has progressed to what I would simply call a master storyteller.

In Iron House, Hart strays a bit beyond his comfort zone for the setting.  Until now his books have been set exclusively in rural North Carolina with a strong preference for Rowan County and the Salisbury area – not surprising given that Hart calls the area home.  However with Iron House, Hart takes a few steps away.

Iron House opens in New York City where Michael, our main character, awakes in the bed of his girlfriend, the exotic and terribly sexy Elena.  I will admit, the opening catches you and doesn’t let you go.

Iron House ostensibly tells the story of two boys, Michael and Julian, who were orphaned at a very young age.  The boys end up filed away in a mental hospital turned orphanage called, Iron House.  Iron House is not a happy place, in fact Hart paints it to be just a step or two better than hell in that on the rarest of occasions a child is adopted.

There’s a murder and the boys are separated.  Julian is adopted and Michael runs away.

Michael, taken under the wing of one of the largest crime bosses in New York, has become a top enforcer.  Julian, adopted by the now United States Senator from North Carolina, has become a children’s author, but is haunted by the ghosts of his past.

Michael is at a crossroads in his life.  He wants out of the mob life.  His girlfriend is pregnant and the crime boss is dying.  However, the mob won’t let him leave.

In an explosive New York City confrontation, Michael and Elena narrowly escape and head to North Carolina to make sure Michael’s brother is safe.

With this as the setting Hart spins his tale.

Hart does a wonderful job combining both plot and character driven fiction.  His flawed characters make for some extremely entertaining reading and his ability to command the story makes me as a writer plain envious.  I believe that in Hart there has been discovered a new champion of Southern literature.

As I was reading the book I was nearing the point of resolution between several of the characters but was puzzled given the pace of the book at that point balanced against the number of remaining pages.  In true form, Hart was not finished when the point of resolution was reached.  He allowed a moment for composure then it was off to the races once again.

If you like mysteries blended with southern literary fiction you’ll love Iron House.  However, even if you don’t you owe it to yourself to read this book.

There are a few points that I should mention.  They’re minor, but I believe it would be okay to have one or two characters that were without inner demons. After all, while I believe most people could benefit from therapy, not everyone needs it.

Overall it was worth the wait and I’m already looking forward to Hart’s next.

Don’t forget to comment for a chance to win a FREE audiobook of Iron House.