In Leah’s Wake by Terri Giuliano Long – A Review 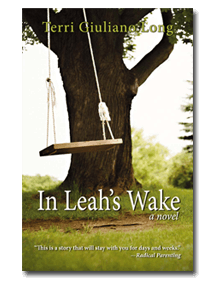 The manner in which Terri Giuliano Long has woven the tale of In Leah’s Wake is perhaps best described as a tapestry of words.

We spent hours discussing the book and what we had taken from it.  Most surprising was the spontaneous nature in which these discussions developed.  We didn’t plan it, it just happened.  With only a simple question we realized we had to talk about this book.

I read a lot of books and it is not a frequent thing that this happens.

Long tells the story of the poster family for the American dream who stand by helpless as they witness their reality crumble around them.  A Husband and Wife, two perfect children and the family dog live in an idyllic world, but cracks start to show.  They find their perceived perfection has left them ill equipped to stop their decent into chaos.

Problems start with their eldest daughter, Leah, an extremely smart student and gifted athlete. As her problems grow they cause a ripple effect through the family.

Through a gift for dialogue Long creates some very memorable characters, characters to whom you will relate and will identify with.

The themes in Leah’s Wake are intense and mature.  The problems are contemporary.  The reality is that many times you want to turn a blind eye to situations like you will find in the world Long creates, but in the end, the story won’t let you leave until it reaches the end.

I would recommend this book to fans of literary fiction and to fans of character driven story lines.

This is Long’s debut and I for one and anxiously awaiting her next offering.  As an added bonus, Leah’s Wake, along with several other books are available today on Kindle for 99 cents.  Take my recommendation and go get this book then not only will you want to talk about the book but you’ll also be telling everyone that you got it for less than a dollar.  Visit the Best Seller for a Day Tour page here or In Leah’s Wake on Kindle here.