Farsighted by Emlyn Chand – A Review 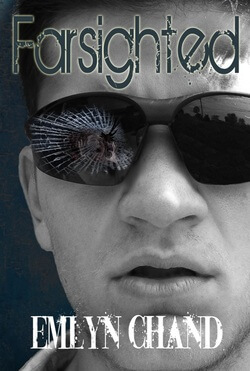 I don’t generally read the YA genre, but I’ve been expanding my reading list.  With Farsighted by Emlyn Chand, I’m rather glad I did.

The premise is straight forward.

We have a sleepy mid-western town and in this town is a high school.  Along with the high school comes all that one would expect.  There are those who are members of the “in” crowd and those who simply aren’t.

Then there is Alex Kosmitoras.

Alex is a 16 year old sophomore who is struggling to fit in.   If all were perfect for him, fitting in might still be a problem, but alas, all is far from perfect.  His lack of friends, his parents financial struggles and the requisite teenage angst would be enough to maximize the stress for any teenager, but Alex’s problems are compounded.

With all of his compounded problems he copes by keeping to himself.  In fact, this had been his plan as he entered his sophomore year.  However, as with any well conceived teenage plan, one can generally expect the worst.

Shortly into his sophomore year Alex realizes that he has a special gift.  You see, Alex is able to see into the future.  However, since nothing is as it may see, the gift appears in its most raw of raw forms.  Initially Alex has tremendous difficulty distinguishing his visions of the future from reality.  This causes some interesting and entertaining moments for him.

Initially Alex fights his gift not wanting to become even more the social outcast; however, he meets two girls who have moved to his small town who, he finds out, like he, also have special gifts.

The trio join forces and collectively usher us through the first installment of a series that has great potential.

The strength in Chand’s writing and story telling is her ability to capture the teen psyche.  As an aside, I find the thought process used by most teenagers incredibly frustrating often forgetting that like most things in the teenage world, it is still developing.  As Alex was proceeding through Farsighted, I found myself wanting to grab him and say, “Really?  That’s what your going to do here?”  In short I simply didn’t agree with how he was going about things.   However, I would remind myself that the genre was Young Adult and that such was the reality of the teenage world and in large part is what makes YA, well, YA and in this case, really good YA fiction.

In my frustration it came to my realization that Chand had nailed the moving target that most  teenagers embrace.  And she did it without any cliches.

Alex makes some terrible decisions, but he learns from the decisions and his education moves the story along.

While the story is a tale, partially at least, of a teenager’s coming of age, he still has some age to attain (which bodes well for the next book and the book after that.)  However, you’ll find more than the struggling teenager.  The family relationships in the book are written in the most solid of fashions.  The dialogue is crisp and compelling

and through it all, Farsighted is a good ole’ mystery.  The fun part of the mystery is that given Alex’s ability to see into the future, the mystery is a prospective mystery leading the characters on a quest not to find out what happened, but to, hopefully,  keep what they know will happen from happening.

Farsighted is Emlyn Chand’s debut novel.  It won’t be her last.  Get on the band wagon early.

THE BOOK:  Alex Kosmitoras may be blind, but he can still “see” things others can’t.  When his unwanted visions of the future begin to suggest that the girl he likes could be in danger, he has no choice but to take on destiny and demand it reconsider. Get your copy today by visiting Amazon.com’s Kindle store or the eBook retailer of your choice. The paperback edition will be available on November 24 (for the author’s birthday). THE CASH PRIZES:  Guess what? You could win a $100 Amazon gift card as part of this special blog tour. That’s right! Just leave a comment below saying something about the post you just read, and you’ll be entered into the raffle. I could win $100 too! Please help by voting for my blog in the traffic-breaker poll. To cast your vote, visit the official Farsighted blog tour page and scroll all the way to the bottom. Thank you for your help with that. THE GIVEAWAYS:  Win 1 of 10 autographed copies of Farsighted before its paperback release by entering the giveaway on GoodReads. Perhaps you’d like an autographed postcard from the author; you can request one on her site. THE AUTHOR:  Emlyn Chand has always loved to hear and tell stories, having emerged from the womb with a fountain pen grasped firmly in her left hand (true story). When she’s not writing, she runs a large book club in Ann Arbor and is the president of author PR firm, Novel Publicity. Emlyn loves to connect with readers and is available throughout the social media interweb. Visit www.emlynchand.com for more info. Don’t forget to say “hi” to her sun conure Ducky! MORE FUN: There’s more fun below. Watch the live action Farsighted book trailer and take the quiz to find out which character is most like you!