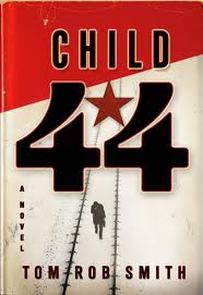 As of late my focus, intended or not, has been about reading new writers.  Well, new for me anyway.

I’m continuing this with the book Child 44 by Tom Rob Smith.  I should stress the concept of new to me as Smith, now with three books, will be familiar to many.

First, Child 44 is a dark book.  It begins in the final days Stalin’s Soviet Union.  The main character, Leo Demidov, is a mid-level Soviet security agency officer.  His career has been spent pursuing enemies of the state, often having to hunt them down.  His targets are generally quickly executed or, perhaps worse, sent to the gulags.  However in Stalin’s time the hunter can quickly become the hunted, frequently on nothing more than the word of a stranger.

After a distinguished career, Demidov finds himself the target of the Soviet security machine while he relentlessly pursues a serial killer.  A serial killer of children.

In this aspect, as well as others, Child 44 is based upon actual historical events.  A Ukrainian serial killer, one of the most notorious ever, was the model for the villain in the book.  From my study of Soviet history, it appears the backdrop of Soviet Russia in the early 1950’s is based in actual fact.

The strengths of Child 44 stem from this tie into an authentic past.    The book captures the essence of the country, the time and tension that filled them both.  Smith conveys to the reader the desperation of life under Stalin and he does an amazing job of giving a feel as to how the Soviet machine operates.  However, the strength’s are also a weakness of the book.

The characters are compelling, though I found myself looking for a bit more development.  And while I found it fascinating reading about the stark reality of 1950’s Russia, at times I did feel like I was getting a hefty dose of Soviet history.

These two points aside, Child 44 is a masterful tale of suspense.  Smith has as gift for building tension and drawing the reader into the tale. Child 44 is one of those books that you won’t want to put down.  I was also pleased to see that Smith has two other books featuring Demidov, who really is an enjoyable character.  I’ll be interested to see how he develops.

Child 44 would appeal to fans of mystery and suspense.  It would also be particularly interesting to those who have an interest in getting a very authentic peek behind the curtain that was 1950’s Russia.