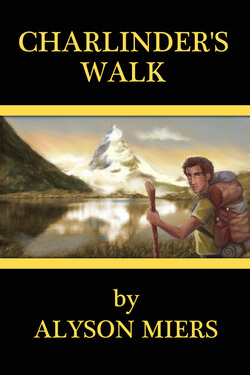 The first thing you realize when you begin Charlinder’s Walk by Alyson Miers is that 2012 was a bad year.  In 2012 the world is/was(will be?) hit by the Plague, a catastrophe that kills, in short order, the majority of the world’s population leaving only small pockets of survivors scattered across the globe.

There’s no electricity, no technology, no infrastructure, no mass transportation, no central government – basically nothing remains of the world that exists were we to turn and look out of the nearest window.

Here we meet Charlinder who lives in a small agrarian settlement nestled in what was the previously the eastern United States.  Previously being the operative term here.  The world of 2130 doesn’t look much like the world of 2012.

For those in the year 2130 the overall thought of the times is probably best summed up by a quote from the book.

“But I mean to say, even we here in Dover don’t have much to say about the Plague anymore. Our grandparents went on about it, but for us, it’s more like, yeah, it happened, it killed everyone and the rest of us got put back to the friggin’ tenth century BC, now here we are in the ninth century BC, so what else is there to say?“

The overall premise of the book is actually quite refreshing. (Yes that’s an interesting choice of words when the end of the world is the topic, but Miers’ treatment of the subject is novel.)

Charlinder is a bit of an anomaly. He lives in a small village that was founded post-Plague by a woman who provided a written account of the times around the Plague as the end of society has come to be known.  Charlinder spends a great deal of time studying her accounts.  He lives in a society where skills such as building, hunting, farming and other physical abilities are prized.  He, on the other hand, is a teacher.  He’s also a thinker.

From the time his community was founded there have been competing theories as to why the Plague occurred.  View one is that the Plague happened as a product of science.  View two is that God caused the Plague as punishment.

Charlinder wants to definitively answer this question.  So, using guidance from the written history he has, he decides to take a walk and find the answer.  Trouble is, Charlinder lives on the east coast of what was the United States and conventional wisdom is that the Plague started in Italy.

Quite a walk.  A walk that becomes Charlinder’s Walk.

Questions arise and are debated at length concerning secular and religious foundations as well as government and society.  While some of the discussions do get a bit drawn out, it was impressive to see the vehicle of apocalyptic fiction to engage this discussion.  It’s particularly fascinating to see how Charlinder’s Walk explores different possibilities as to how society would survive and carry on after such an apocalyptic event (surprisingly a future free of a single zombie).  Miers does a great job of setting up a variety of different societies, showing how given a common problem – the end of the world – not everyone would come up with the same solution or even solutions.  For instance, 100 years post-Plague, it is a rarity to find someone who can read and write.  In a society where food and shelter are paramount, these skills simply aren’t at a premium.  There are even varying views on topics such as the repopulation of the human race.

I will say I was surprised at how peaceful the society Miers creates is in total.    While I am not an advocate of violence, I generally think of post- apocalyptic fiction as dealing with how the main character responds when other survivors revert to animal like behavior, essentially violence begets violence.  The little violence there is almost seems an afterthought.  I would have expected if someone at a point in history undertook to walk around the world they would likely encounter one or two unsavory characters.  However, who is to say that a future post-apocalypse society would not be the completely peaceful haven as described by Miers.

I found the book to be a breath of fresh air in a genre that all to quickly can become cliché.  Using a little walk around the globe as a method to paint a canvas showing a possible society of the future is completely different and works quite well.

Go out and pick up a copy and give it a read.  Encourage a couple of friends to do the same. Aside from the well-crafted fiction you will find between the covers, you can rest assured that once you and your friends have finished, you will find yourself discussing the themes that Miers raises.  That, in my humble opinion, is what sets a book apart from the ordinary – wanting to talk about it when you are done.

Fans of apocalyptic fiction or works blending in philosophy, government and religion would enjoy this book.

About the author: Alyson Miers was born into a family of compulsive readers and thought it would be fun to get on the other side of the words. She attended Salisbury University, where she majored in English Creative Writing for some reason, and minored in Gender Studies. In 2006, she did the only thing a 25-year-old with a B.A. in English can do to pay the rent: joined the Peace Corps. At her assignment of teaching English in Albania, she learned the joys of culture shock, language barriers and being the only foreigner on the street, and got Charlinder off the ground. She brought home a completed first draft in 2008 and, between doing a lot of other stuff such as writing two other books, she managed to ready it for publication in 2011. She regularly shoots her mouth off at her blog, The Monster’s Ink, when she isn’t writing fiction or holding down her day job. She lives in Maryland with her computer and a lot of yarn. Connect with Alyson on her website, blog, Facebook, Twitter or GoodReads.

Get Charlinder’s Walk on Amazon or Barnes & Noble.