Bella by Steve Piacente – A Review 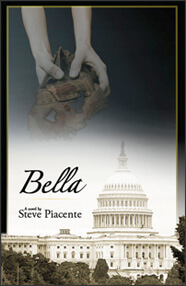 Piacente spent a career as a journalist and his experiences set the foundation for the compelling tale that is Bella.

A soldier is killed in Afghanistan.  The official US Army version is that the death occurred at the hand of the enemy.  However not long after the funeral his widow receives an anonymous phone call.  The caller says her husband’s death was not as the Army has told her.  Seems we have a cover up that reaches to the heights of our nation’s military order.

The widow, Bella, finds her way to a DC reporter and enlists him to help her find out the truth about what really happened to her husband.  Though reluctant at first reporter Danny Patragno, our central character, finds himself quickly involved in not only realizing there is a cover up, but also in being involved with Bella which adds a healthy dose of conflict to his sense of journalistic integrity.

Piacente writes about what he knows.  He blends together his knowledge and understanding of beltway politics, southern culture and the news business while mixing in a romantic storyline, all of which combine to make a compelling read.

One enjoyable part of Bella is that Piacente writes in the first person which adds to the story.  Absent the all-knowing narrator, the reader sees and experiences the story as it develops through the eyes of Patragno.

While the story, on its surface is a razor sharp tale of political intrigue and cover up the real story is the tale of Patragno as he struggles with the reality of his life.

The balance between the intrigue and suspense of a timely, believable issue with the reality of everyday life gives Bella a heightened degree of relevance.  Many a writer can craft a tale where the fate of the world hangs in the balance but rarely do these books have any foundation in everyday life.

In Bella Patragno is racing against time and the might of the US military while at the same time having to deal with problems in his personal life, problems with his job and the uncertainty of Bella, the enigma of a woman who has suddenly consumed his existence.

Piacente has an eye for the details and characteristics of the locales he uses in his book.  He transports you up and down the east coast with seamless ease.   All the while he uses a gift for dialogue and suspense that builds to a satisfying ending.  All too often in books I read it seems authors work to end books without resolution.

I don’t expect happily ever after in every book I read, but a degree of closure is always a nice thing.  Piacente gets this and provides a great ending to the story that, I feel, will satisfy even the most demanding of readers.

Overall Piacente has an effortless gift for storytelling.  Plain and simple.  He creates believable characters, characters with flaws but characters to which the reader can relate.

Fans of literary fiction and tales of suspense would enjoy Bella.  As well, fans of fiction with a strong male lead will be happy with Piacente.

Go get this book and give it a read, I am sure that you, as did I, will find it hard to believe that this is a debut novel.  I only hope that there are more to come and soon.