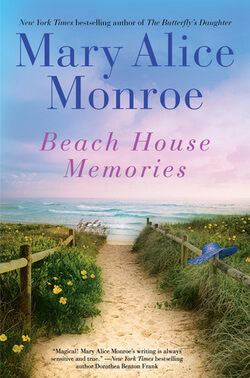 Mary Alice Monroe is no stranger to the South Carolina Lowcountry having regularly looked to the area as the setting for her novels.  In Beach House Memories she not only returns to the area but she also turns back the clock more than a quarter of a century to offer an intimate glimpse of a landscape that will never been seen again.  Then, as a bonus, Monroe also spotlights a cause that is near and dear not only to her, but also to many in the Lowcountry.

Mary Alice Monroe is devoted to the sea turtle.  Through coastal development the very existence of the sea turtle has come into jeopardy.  I won’t go into great detail but will say if you’re curious, a great place to start is Beach House Memories.

Beach House Memories is also a return to some familiar characters.  If you’ve read Monroe’s earlier work, The Beach House, it will likely be as if you’re visiting some old friends.

Beach House Memories starts out with a present day, elderly Olivia “Lovie” Rutledge staring out into the Atlantic from her Isle of Palms beach house.

While the Charleston, South Carolina of 2012 is similar to the Charleston of 1974, much has changed and one of the areas with the most change is the Isle of Palms.

Today the Isle of Palms is a world-renowned vacation destination visited by thousands each year.  It’s home to thousands of year round residents, is the site of championship golf, water sports, live music and dining and it also holds more memories per square foot than one could begin to imagine.

For Lovie Rutledge 1974 served as the launching pad for many of the memories she holds so dear today.

In the 1970’s the Isle of Palms was a sleepy South Carolina Barrier Island with few more than perhaps a thousand residents and many of these weren’t full time.

It was common in the 1970’s (and still today) for Charleston families to have a summer house on one of the area islands and to take up residence at the beach from Memorial Day to Labor Day though the present ease of travel from Charleston to the barrier islands has made the trip frequently one of a weekend getaway.

However in 1974 Lovie Rutledge loaded up her Buick and together with her two children, headed to her family beach house for the entire summer. Little did she know as Charleston grew smaller in her rearview mirror that she was forever leaving behind the life she had known.

Lovie’s world was in a state of flux.  As was common in the 70’s she was as stay at home mother.  Her husband, Stratton Rutledge, was old Charleston tracing his heritage back to a signer of the Declaration of Independence (not as farfetched as one may think).  Lovie had married young, had children and now, well in her 30’s is struggling to find her real identity, to learn after all these years who she really is.

However, Lovie is not without passion.

One of the forces that drives her is her love of the Loggerhead Sea turtle.  Every summer she spends her time plotting, monitoring and protecting the sites where the sea turtles come ashore to lay their eggs on the Isle of Palms.  She’s been doing this so long and with such a passion she’s earned the nickname, “The Turtle Lady.”

The summer of 1974 starts as many summers of the past have for Lovie, after all, she’s been coming to the Isle of Palms every summer for her entire life, but this summer will be different.

Before the development can start, the developers must study the habits of the sea turtles to make arrangements for them in their development.  Lovie, with her lifelong experience, finds herself in the middle of this research working together with a handsome marine biologist who specializes in the sea turtle.

I was curious how Monroe would weave in a cause so obviously near and dear to her heart – the cause of the Loggerhead; however, the fashion in which she built the engaging and compelling plot that is Beach House Memories made everything that happened seem completely natural.

Monroe takes the reader from the comfort of their world and gently places them in the most wonderful of places – a sand dune in a summer storm, the warm Atlantic waters on a summer afternoon, a maritime forest as the morning sun weaves through the tree canopy, an open convertible as the aroma of the marsh and ocean rides the air.

Monroe’s ability to capture the setting of the South Carolina Lowcountry is alone reason enough to pick up this book immediately; however, as rare as it is to find an author capable of such literary transport, once Monroe takes you to the Isle of Palms, the characters to whom she introduces you will leave you longing for more.

As I said before, for fans of Monroe it will be like visiting old friends.  The ability to create such familiar characters is something not to be taken for granted.

Monroe’s sense of character is perhaps the strongest quality of the book.  In a seamless fashion she puts together a cast that embodies both depth and spontaneity.

Yes, the book is a love story, but it is also a tale of coming of age, of regret, of living with choices – not always the right ones, of longing, and, through it all, of hope.

Monroe has once again written a book that will undoubtedly be along a beach or pool during the coming summer; however, to wait until you travel to the beach to read Beach House Memories would just mean you’ve waited too long.  Or perhaps you can use the book as an excuse (like we need one) for a trip to the beach to create some memories of your own.

Fans of southern fiction, novels with strong female leads, love stories, and those who love to read about the South Carolina Lowcountry should Beach House Memories as soon as possible.