A Line in the Ice by Jamie Craig A Review 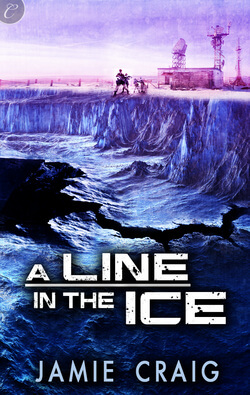 I generally don’t read science fiction, sticking more to the mystery/thriller/suspense genre, but I’ve been trying to branch out and read things out of my comfort zone.  So when I had an opportunity to read A Line in the Ice by Jamie Craig, I welcomed the opportunity.

I found the premise quite interesting.  In the frozen tundra of the Earth, a rift between worlds had opened and creatures are seeping through intent on having their way with the entirety of the Earth.

A multinational force of ultra-trained soldiers acts in this arctic wasteland as a first line of defense.  It seems that during the first World War there was a similar occurrence (that being an invasion of these other-worldly creatures) so the military has been aware of the potential ever since and wants to save the Earth should it happen again, so they sent out 6 soldiers.

On a routine patrol instead of a monster from across the rift, the team finds a man.  They bring him back to their base and discover he is a descendent of the force leader from World War I that not only repelled an earlier attempt at invasion, but had also disappeared.

The book starts out with a bang and moves along at a great pace.  The characters are developed quite well and I was very taken at how Craig was able to keep a number of distinct personalities together and work their interplay in an effective fashion where no individual seemed contrived or otherwise ineffective.

My one qualm with the book was the occasional diversion away from saving the world for intimate interpersonal relationships.  I found this a bit distracting, wanting to get back to learn more about the monsters, the rift, the other world and whether or not the Earth would be saved.

I would recommend this book to anyone who enjoys classic science fiction or anyone who wants a fast paced read.

Overall I would give the book 7 out of 10 stars.

Tour Notes: Please vote for my blog in the traffic-breaker poll for this tour. The blogger with the most votes wins a free promotional twitterview and a special winner’s badge. I want that to be me! You can vote in the poll by visiting the official Line in the Ice blog tour page and scrolling all the way to the bottom. Learn more about this author duo by visiting their website, blog, Facebook or GoodReads pages or by connecting with them on Twitter.
Share This